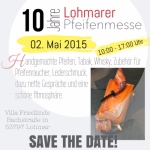 While a big part of the pipe-smoking world had their attention focused on the enormous Chicago Pipe Show, another, smaller, European-German part, attended the interesting and cosy Lohmar Pfeifenmesse. I went there last year and had a blast despite the gruesome weather. So on the morning of the pipe-show I opened the curtains a bit nervously and… Sunshine! I knew it was going to be a good day. After a quick shower Rob (forum nickname Robbie-San) already rang the doorbell, just as last year I rode with him. The only difference was that we did not have to pick up the other Rob (forum nickname: Smoking Rob) because he had a gig with his band that evening and could not make it. Yoda greeted me once again in Rob’s car and like last year I had made cheese-sandwiches for the road which we both happily ate while chatting away.

To Rob’s delight I pulled out an aged tin out of my bag of Peterson Sweet Killarney, one of his favourite tobaccos, as a “thank you” for driving me. The journey went a lot faster this year, I guess it helped that the German highways did not look like rivers now. Just before 10.30 am we arrived at Villa Friedlinde in the heart of Lohmar, the annual location of the pipe-show. 2015 was a special edition, the 10th one, still organized by pipe-maker Volker Bier. Like last year a large section of the surrounding park also was part of the show. That Volker closely works together with the local authorities was proved by the fact that even the mayor of Lohmar attended the Pfeifenmesse.

Once inside I immediately looked for the stand where I bought the Dunhill Shell cherrywood-shape last year, hoping to find more of those gems. But instead I bumped into Eddy. He mailed me some time ago that he recognized one of my Dunhill prince-shaped pipes in my Prince of Pipes blogpost. To be precise the Dunhill Bruyere from the early patent era. Apparently that pipe once belonged to him! He asked me where I bought it, at Esterval, I answered. That also was the vendor where he once bought it. Sadly the old mouthpiece got so thin by all the maintenance over the years that it had cracked. Eddy had it replaced by German pipe-repairman Marco Janzen.

Unfortunately he was not 100% happy with the new mouthpiece because it was thicker and wider as the old one. On top of that he always had been a little afraid of smoking this fragile prince too hot. So Eddy traded it with another German against a Dunhill bulldog-shape and probably that man sold it to Esterval again. We exchanged some pictures and from seeing those we both came to the conclusion that I now had the old prince of Eddy. After all the mailing we did we decided to meet at Lohmar and bring some of our Dunhill princes. Eddy had brought a Dunhill Shell patent era with him which could have been the brother of one of mine, exactly the same style mouthpiece. During the day we now and then bumped into each other and every time kept chatting a bit. Wonderful guy.

Rainer and Markus at the HU Tobacco stand

A stand I did not wanted to miss was the one of HU Tobacco. Sadly owner and master-blender Hans Wiedemann could not come to Lohmar. I mailed him about a question of his excellent Fayyum Kake a couple of months ago and heard to my terror that he had suffered a heart attack. Thank the heavens he is well on his way to recovery but the Pfeifenmesse came to soon for him. So for the day two friends of him, Rainer and Markus, took over business. I also know Rainer, we regularly mail with each other, swap tobacco samples and he helped me out with my blogpost of the vintage Dunhill London Mixture which was made in Germany.

It already was very busy at the stand but Rainer immediately recognized me and we shook hands. I had some things for him and he for me. I brought some Germain Rich Dark Flake with me for him and traded a pouch of Condor against some local made liver-pâté. Believe me, for someone who does not like the soapy Lakeland tobacco aroma it was an excellent exchange. The liver-pâté was made by the local butcher in Rainer’s home-town and is mouth-watering yummie. On a side note, Rainer gets his tobacco canned at that same butcher. Meat or tobacco, what is the difference? Also Hans had a surprise for me, Rainer handed me over a bag with a tin inside. “Guard it with your life, the contents are very wanted!” he said. Inside the bag was one of the last tins of Fayyum Kake! Thank you very much Hans! Fayyum Kake is no longer made (for now), it is pressed by Hans himself and with his condition it just became too much work. For the rest I bought some delicious Balkan Passion and Director’s Cut at the stand.

Standing in the queue before the food-wagon

Unlike last year the food stand now was outside the villa, a wagon with a big round plate beside it where potatoes were baked. The stomachs of both Rob and I grumbled a bit so we decided to get some Bockwurst. What I did notice was that the prices had gone up, €4 for a simple Bockwurst with one tiny slice of bread was a bit on the expensive side for me. Next year I’ll bring more sandwiches with me.. Behind me in the queue before the food-wagon stood German blogger Ralf Dings of the excellent Jogi-wan blog. He did not immediately knew who I was but when I said “Dutch Pipe Smoker” an expression of recognition came over his face. We talked a bit about how close HU Tobacco came to closing down because of Hans’ heart attack and that that really would have been a crying shame. When Rob and I finally could order some food and drinks I made a strange movement with my hand and accidentally slapped the Dunhill Root Brair I was smoking out of my mouth. It just missed the hot surface of the big baking-plate and hit the side with a loud bang. Under the worried looks of the people in the queue I rapidly picked up the pipe and… Not even a scratch. *Pheww!!*

With our bellies filled it was time to properly look at all the stands. Compared to last year I was a little less impressed with the selection of pipes. The stand where I bought the Dunhill Shell cherrywood shape did not have any new models that I liked. However, they still had the same prince I saw at the previous Lohmar edition but because it was from the 90’s I choose not to buy it. Yes I know, I can be a snob.. I very much liked the offerings of Foundation by Musico, classic shapes with sometimes beautiful blasts. Sadly only just above my budget.. Which I had with quite a lot of pipes. Oooh, this one is nice! Owww, €250.. Nevermind.. As a rule I never pay more than €150 for a pipe (only 1 exception, I once bought a Winslow Harlekin). Partly because I am a cheap ass Dutchman and partly because Ellen will kill me if I come home with an expensive piece of smoking-wood. (“When do you spend some money on me, you cheap ass bastard!”)

Maike from Maike pipes has a better price-quality ratio, which resulted in almost selling all of her available pipes. I’ll be sure to keep an eye out for new offerings from her. Holger Gunia, master of the short, stubby pipe also did some good business. Few pipes were left when I examined his stand. Obviously inspired by Roger Wallenstein but taking it to a new level a real eye-catcher were the pipes of Uwe Maier. Good to smoke and put on your livingroom-cupboard as a piece of art. The large morta pipes of Colja Schoppe were also very impressive. Not my thing but I can perfectly imagine lots of pipe-smokers will like his offerings.

While walking around we bumped into Fred, d’Artagnan and André. The last two also were there last year. After having talked a while Fred and André went their own way and d’Artagnan joined us. Beside pipe-stands there were also stands who sold other hand-made things. Last year I bought Ellen a dark blue bracelet so now I wanted something different and found just that. A lady had for sale all kinds of rings and pendants. I picked 2 pendants, one with a stone which had a purple hue (the favourite colour of Ellen) and one with an ammonite in it. d’Artagnan liked that last one so much that he decided to buy one for himself. Because of the lovely weather we all had dry throats and there was only one cure for that: beer! The voluptuous lady at the stand of the local Lohmar brewery recognized us immediately. Last year we told her we were Englishmen but now we decided to tell the truth, that we were merely Dutchmen. Luckily her smile stayed the same and the beer was once again pretty good (although it could have been a bit colder..). We then went to park near the villa and sat down on one of the wooden benches to catch some sun, chat and smoke a pipe of course.

Rob at the beer garden

Soon it became time to go, the Lohmar Pfeifenmesse was getting quieter and quieter. I already had in mind to go eat something at the local Brauhäuschen. But the restaurant was still closed when we got there and a note on the door said it was reserved that evening. Later I found out that it was reserved for the Lohmar crowd.. We drove on and found a nice beer garden where we sat down and had some tasty German beers. Unfortunately the kitchen of the beer garden opened late so once again we went looking for a place to eat. “All I want is a picturesque, decent restaurant preferably in a good looking setting” I grumbled to Rob.

d’Artagnan has some fancy navigating devices in his Mercedes so he pointed us towards just the place I was looking for: Café Restaurant Meigermühle, located in an historical timber framed building at the edge of a forest. To our surprise their neighbour was the local Lohmar brewery (who had a stand at the pipe-show remember). As soon as we stepped out of our cars the same voluptuous lady saw us and invited us inside, where we got a short tour in which she explained the making of their beer in rapid German. Afterwards still smiling we went to the Meigermühle and sat down on the outside terrace. The choice what to eat was easy for all of us: Schnitzel! And to be perfectly honest, the one I had was far better than the mediocre one from last year in Kleve. Tender and tasty with a delicious pepper-sauce, ooooh yeah! After dinner we went our separate ways, d’Artagnan was going to nearby Cologne and Rob and I drove back to The Netherlands. Back at my sleeping address in Brabant we shook hands and we thanked each other once again for a wonderful day.