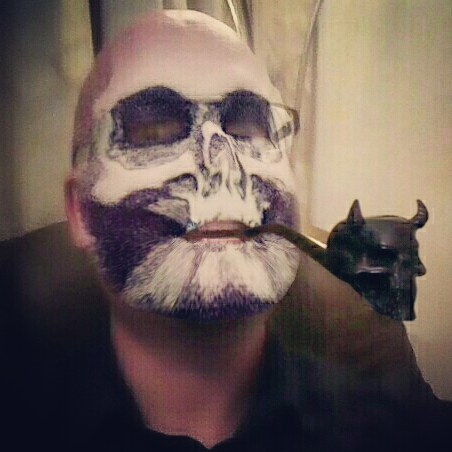 When I saw the first images of meerschaum pipes in my early pipe-smoking days I was mesmerized by all the shapes and sizes they came in. Models I particularly liked were the skull-pipes made by, for example, Sadik Yanik. But… High quality meerschaum pipes are pretty expensive and I don’t know yet what I think of the material. To be honest I never smoked a true meerschaum pipe but one day I will, when I have the funds to buy a stunning piece.

So I looked if I could find a decent figurine pipe made from briar. Quickly I stumbled upon some old specimens made by Dunhill and Peterson. Well, actually made for Dunhill and Peterson. French carver Jean Sommer produced some for Dunhill and his fellow countryman Louis Lamberthod made several for Peterson. By the way, he did this with the help of a sculpting machine for pipe heads which took him about 3 years from conception to realization. A couple of years ago I saw a similar machine in the Big Ben factory which made (amongst others) the Porsche pipes. Anyway, those old figurine pipes were waaay out of my price-league and further searching on e-bay only revealed low quality carving offerings. Then I saw on the Dutch/Belgian pipe-smokers forum that fellow member Carro had bought something new: a skull pipe made from briar! Made by one German based fellow called Oguz Simsek. I looked at the pictures he posted and saw that the carving was of superior quality. So I googled mr. Simsek and found out he has a Facebook page and sells his pipes on e-bay. Strangely enough I totally missed him when I first searched for figurine pipes. Unfortunately at that time I did not see any pipes I really liked but I always kept an eye out for updates.

And some time ago I was rewarded for regularly checking the Facebook page because there was a new pipe for sale. One with the bowl shaped as the head of a demon skull and with a pretty long churwarden-style stem. Immediately I fell in love with it and bought the pipe. I really must mention the price, I can’t believe mr. Simsek can make pipes for this amount of money because including shipping costs I only paid just under €100 (± $134). In no time I had the pipe at home where I could marvel at the superb carving details. Incredible that one can do that with such a hard wood as briar. The inside of the bowl was neatly covered with some kind of smoking-paste, ready for some action. So what would I smoke in it.. Aromatics, Virginias/VaPers or latakia-blends? After some thinking I came to the conclusion that latakia would fit nicely. I mean, if you see the pipe would you expect to smell fruits or other sickly sweet stuff coming from it? I loaded the pipe with some Squadron Leader and as I expected it smoked just fine.

I asked mr. Simsek if he was willing to answer some questions and luckily he was. But just as with other handcraft-men I interviewed the answers unfortunately are pretty short. Oh well, I rather have him carving another beautiful pipe.

1. How and where did you learn to carve and shape wood?
I simply learned it by doing.

2. When did you begin with the carving of pipes and why?
For years I had a collection of antique meerschaum-pipes and from there my interest grew up to the point that I started to carve my own pipes.

4. I read that you have Turkish origins, were the Turkish meerschaum masters an inspiration for you?
I am particularly impressed by the creative works from old (non-Turkish) meerschaum masters like Ludwig Hartmann, Franz Hiess, F.R. Rosenstiel and others from the late 19th century. Please look at my Antique Meerschaum Pipes Museum on Facebook.

5. What kind of woods do you use for your pipes?
I work with olive-wood and of course briar.

6. What materials do you use for your stems?
I make acrylic stems, the material is very good to work with, easy to clean thus being very hygienic.

7. Can you tell something about the equipment you use for the making of the pipes?
I use state of the art equipment and a lot of handwork.

8. How do you decide what figurine pipe to make next? What are your inspirations for them?
My head (fantasyworld) is overflowing with new ideas and I try to realize as much as possible.

9. Which figurine pipes do you like to make the most and why?
That would be the skull pipes. Why? “Bedenke, dass du sterben musst/sterblich bist!”. (“Remember that you will die / you are mortal!”) Which is precisely the reason for the smoke-skulls coming out of my pipe in the banner of this blog. It relates back to the Latin phrase “Memento Mori“, the consideration of the vanity of earthly life and the transient nature of all earthly goods and pursuits.

10. Which figurine pipes do you least like to make and why?
Those are pipes with long wavy hair or beards where the process is tedious and time consuming.

11. Can you make custom figurine pipes, for example from pictures of a pet that a customer gives you?
Custom-made to customer requirements is very tricky, because with pipe-wood you can have rubbish or a straight grain. This makes calculating a price very difficult.

12. On which pipe you made are you most proud?
That is the “The Nude Victory”, a replica of an antique meerschaum pipe.

13. I assume you smoke pipe, when did you begin pipe smoking and why?
I seldom smoke..

14. What are your favourite pipe-brands and why?
Falcon pipes. Simple but brilliant.

15. What is your favourite tobacco-blend?
Rum & Maple Pipe Mixture.

16. Any last words for readers?
Sculpturing is the connection between passionate devotion and technical precision.