As every year the annual meeting in Heukelum of the Dutch/Belgian pipe-smokers forum marks the beginning of dark and rainy autumn. At least, that is what the weather-forecast said. And when I looked outside the window on Sunday 29 October I believed it. Oh well.. Like always I picked up Mark at the Deventer train station and together we drove to the carpool place where Ed would be waiting or us. Normally Johnny would also be there but he had to finish some work first and came later. So the three of us rode to Heukelum and to my surprise the weather cleared up; blue skies, sunshine. Very un-Dutch-like. When we arrived at ‘T Kuipertje owner/brewer Henk had made a tent at the front of brewery with most sides closed. As the inevitable rain began to fall we were glad about Henk’s foresight. 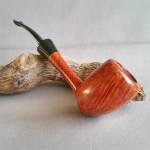 Inside I almost immediately walked to stone-cutting tamper-maker extraordinaire Martin, who like every year organised the meeting, to get my name-badge and drinking coupons. Yup, for the money (€27,50) you get two drinks, there is a big BBQ with all kinds of tasty fresh meat, sauces, salads and baguettes, the rent of the brewery is included and last but not least you get one bottle of special forum-beer with a label made by myself! Since this year Martin is also active in the field of pipe making. And like with stone also wood seems to have no secrets for his hands. He had brought his latest creation with him and I immediately loved it. A perfect mixture between a classic and organic shape.

Like always there was also a little business to be done. The week before I had mailed Rudi, the tobacconist who always comes to our meetings, if he could bring with him a tin of the new Danpipe Fred the Frog, which I already smoked at the Inter Tabac fair in Dortmund. €10 for 50 gr., not bad for this fine blend! Friend and mentor Klaas had offered some vintage tobaccos for sale a couple of weeks before the meeting. I mostly was interested in a couple of older Robert McConnell Pure Latakia tins with in them perhaps some Syrian dark leaf so I bought 3 of them. When I met Klaas he immediately apologised. “Hello Arno, I am sorry, I made a mistake. I thought I had more Pure Latakia but I only had 1 left for you. So you know what, I am going to give you 2 De Graaff Latakia tins.” Wowwww!!! Very generous! Once upon a time De Graaff in The Hague was one of the best tobacconists in The Netherlands and they had their own range of house-blends. They were made by a company in London but exactly which one De Graaff always kept a secret. Nowadays the blends are sadly discontinued. Klaas still has quite some tins under which the pure latakia. And that is not some regular pure latakia, no, it is the Syrian Mountain Blue dark leaf made famous by the legendary Balkan Sobranie 759. Soon I am going to do some home-blending and these tins will come in very handy!

For Frisian pipe-maker Meindert I also had something. Weeks before Heukelum I was looking on ebay when I suddenly saw a beautiful Dunhill. Most of the times it is an auction and in the end the price is way too high for this cheap Dutchman. This one had a Buy It Now price of €100. Hmm.. There must be something wrong with it, I thought. So I took a better look and to my surprise the Dunhill dated from 1943, a patent era wartime pipe, pretty rare! Only thing I could discover was that the rim was very slightly damaged but that was it. So I bought it. When I received the pipe in the mail and unwrapped the package it even looked better than on the pictures, it even still had the inner tube. But still the Dunhill needed some work with the rim and stem. So I handed over the pipe into the skilled hands of Meindert.

I had to laugh when I saw the entrance of forum member Kees (nickname Kiske). For a while he was absent from the forum due to ehm.. differences of opinion with the administrators and moderators of the forum but now he was back. For some time he had been (jokingly) saying that our usual name badges were no good and that we all should wear tiaras instead. Of course you should never say that aloud on the forum because someone made an actual tiara for him. Luckily it was no problem for Kees to actually wear it, it suited him!

Erik Stokkebye and me with the pipe I won

Thinking back the weeks before the meeting the Pipe God really was smiling upon me. On a Wednesday afternoon I had a meeting with other pipe-smokers and forum members at tobacconist Willem Schimmel in Zutphen. Erik Stokkebye, blender and son of the very well known Peter Stokkebye, was there to promote his 4th Generation tobacco range. We had a fun evening, it truly was a delight to speak to the very knowledgeable Erik, which culminated in a contest in which you could win a 4th Generation pipe made by Neerup Pipes. Several questions were asked and the one who had everything right in the end would win. I can’t remember all the questions but the last one was where the 4th Generation tobaccos were made. So I blurted out “In the Orlik factory!” Well, not entirely correct… “In the Orlik factory of the Scandinavian Tobacco Group!” Which was the right answer, I had won the pipe! Back home I quickly noticed that it was a rather large pipe, I mean, my thumb fully fitted in the bowl. Too big for my taste. So I decided to put up a lottery on the forum which was won by Frans. In Heukelum I gave him the pipe, I hope he gets many enjoyable smoking hours from it.

Last year I bought some pipes for the father of a friend of mine, Ton. At that time he was visiting The Netherlands because he lived abroad. Since a month he moved back to our wet, cold and flat country so I invited him to the meeting. Since he is living alone some company is always welcome, so he accepted my offer. Afterwards he told me he stared his eyes out. Ton is an old-fashioned smoker, preferably he smokes the same blend in the same pipe over and over. “What a pleasant gathering of people and what a lot of pipes they did bring with them! And so many bent ones!” Ton only smokes straight billiards  and thinks everyone smokes those because they smoke the best. Well, ehmm.. Ehrrr… Guess I have to teach an old fox some new tricks. Later I was approached by Jos, “Arno, I have something for you, do you want it now or later?” Ehmm, now? He presented me a wrapped package, so I unwrapped it and saw a bottle of Huppelolie (hopping oil)! Yummie! Huppelolie is a tasty “kruidenbitter” (no translation), sometimes my stomach pains me and a small glass of Huppelolie does wonders. But why the bottle? I asked Jos. Because years ago I gave him some tips about buying tobacco overseas. So kind of him!

I also was glad Shaun was there all the way from Belgium and of course all the others of the Fuming Four. For months they have been pestering me that I should go with hem next year to Scotland again. Not only to the beginning of the Highlands this time but all the way to the utmost North point at Kearvaig, where the home-bothy stands of the Kearvaig Pipe Club. An almost spiritual journey. But I still don’t know if I want to go.. I mean, beautiful country, Scotland, but a big chance of bad weather, cold, midgets ehrrr.. midges, mediocre food (although Matron’s curry was excellent!) and the worst of all, no comfort! The bothy has no shower, no soft bed and no toilet which means digging a hole outside if you have to take a dump.. I admit that throughout the years I turned somewhat into a sissy boy, I just like a little bit of luxury mmkay? But who knows, I like organizing such trips so perhaps while doing that I fully decide to go. The other guys of the Fuming Four had a request for me. I am a bit different from them as I don’t have a beard and I don’t have tattoos. Now they wanted me to design the latter. And I also should get it. Ehmm.. I have a virgin skin and I like to keep it that way. But in Shaun’s eyes I already could see his evil plan: Get Arno piss-drunk and then…… *evil laugh*

The rest of the afternoon and evening in Heukelum was very pleasant as usual. So many people, so many conversations, so little time. Around 5 o’clock Henk told us that the BBQ was ready and we could eat. I don’t know what it is but when someone says something like that no one wants to be the first one. But when Arno is hungry Arno is hungry you know? So I began putting tasty meat on my plate and the rest soon followed. A bit earlier then expected the majority of the forum members began to pack and went home. So not long after that Ed, Mark and I also decided to leave. When I got home Ellen was snoring on the couch and woke up when I entered the room. “Did you have a good meeting?” “Yes darling, it was another great day.”

I would like to thank Martin for organizing the meeting! All pictures were made by Klaas, Dirk, Martin and myself.